You know Transparent as the audio brand challenging the unsustainable tech industry, dreamed up by its chief executive officer Martin Willers and chief designer Per Brickstad. But the truth is, they got here through a lot of hard work, and a little bit of fate. The two co-founders of Transparent (and friends before that) were working at Stockholm design studio People People for 10 years, before they hit upon a concept that would be the beginning of Transparent.

At People People, Martin Willers and Per Brickstad were secretly hatching a plan that would one day be known as Transparent. The two were obsessed by the idea of creating a timeless modular speaker that was forever upgradable, solving many environmental issues that the tech industry still faces today. Publishing their early sketches on their blog, they challenged their competitors: how do you create sustainable electronics? On 11/11/11, these early Transparent Speaker designs went viral -- it turned out that people were excited for their modular speaker to become a reality! Through a crowdfunding campaign that finished in 2013, they established a strong backing for their truly unique concept, based on the circular economy model.

If there was one thing the two learned at their time with both Transparent and People People, is that the journey ahead towards truly sustainable electronics would be both challenging and completely rewarding. So let’s work backwards, taking a look at how it started…

Martin’s blueprint for a sustainable future

You can thank a few of Martin’s life long passions for the impeccable standards of Transparent audio. When he was just a boy, he had grand ideas for projects and drew them. Even at this age, Martin would imagine giving talks and interviews to the press on his creations. When he discovered the new promise of 3D modelling at his upper secondary school, there was no going back. At last, he could see his drawings coming to life as real products. This was well beyond his younger self’s most daring dreams.

Teenage Martin was growing more and more interested in sustainable development and the preservation of the environment. At 17, he joined the Youth Environmental Parliament, and his degree project as an industrial designer was on how solar energy can become more interactive for the end users in hotels. These formative moments would lead him towards the creating the circular economy model that Transparent audio uses today.

Per Brickstad speaks of his design profession as a journey. An ever growing ambition to encompass ever more important aspects into a creative process. While some designers are champions of “style”, that is merely one important aspect to consider in order for a product to deserve to be brought into existence, according to Per.

During his first job as a designer at Nokia, back in 2007, he strived to put this way of thinking into practice, inside the walls of the then world leading cell phone company. His first ever design to reach the market was in fact a speaker, a small pocket speaker that had already been selling in many million units, when Per had a career changing moment, an epiphany. Whilst in this concrete way realising the scale and huge impact of his decisions in the design phase, he started to advocate for life cycle analysis usage in the concept stage of the design process. After finding the Nokia ship was very slow to turn, he jumped the ship and moved back to Stockholm to found the People People design studio with Martin and 2 other friends, with big ambitions to change the industry for the better.
While working as consultants for the biggest brands in the tech industry, and finding yet again so much resistance to the potential of sustainable innovation in a design process, Per conceived the Transparent Speaker as a blog post design concept, wanting to show the world a better way of design thinking.

Per believe this way of working has huge potential of transforming the consumer industry at large, and lead to a sensible way of managing our common energy and material resources. Making timeless, modular electronics means making our products ready for a circular economy from the beginning. This way they can be put into ever new important context such as the circular services now offered by Transparent.

Per’s ambition is ultimately to make products that can transcend tech and trends, that can come completely from recycled materials and be forever improved instead of disposed of. He believes that making meaningful products with a lot of consideration has the potential to offer an exciting product experience for the user. A subtle feeling that there is something more to it, somewhere beneath the surface.

So that leads us up to where we are today!

It’s safe to say that this first in forever upgradable tech was years in the making. With Per Brickstad’s eye for cutting-edge circular design, coupled with the scope of Martin Willers’ concepts and their combined entrepreneurial grit, the two brought the Transparent audio tech dream to life. No other tech company is yet to match the Transparent ethos in its commitment to sustainable electronics, or in creating a truce between audio and your living space. Every Transparent speaker comes with fantastic design and sound, but also with a mission to change the world for the better. 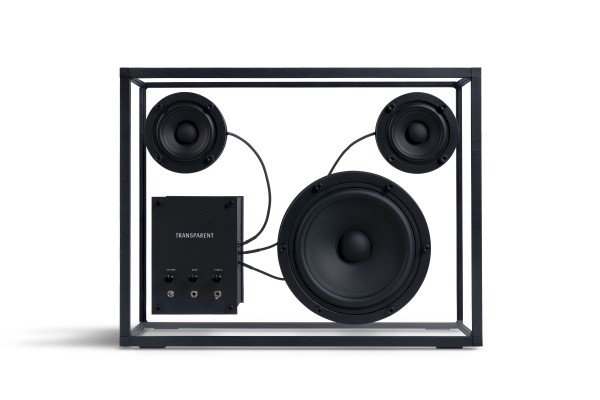 Learn more
At home with Theodora

At home with Be